The 247 Network began in the fall of 2010. In the process of leaving the traditional pastoral setting with the Wesleyan Church for a more organic approach, I reconnected with a friend who was similarly struggling to find something different. Dr. Bill Morrison is a psychologist/teacher at the university of New Brunswick. He has been a professor at a local Baptist university in times past and his roots go deep over many years in that denominational tradition. We began to articulate a vision from our shared experiences and the Word of God. It was evident to us that Jesus is the Vision for the church and we are called to listen and follow.

We are both networkers by heart and found that God was giving us connections with many other displaced believers, wondering around outside of the church as an institution, longing for all of God that could be known.

While we see Kingdom as the greater reality, we found ourselves facilitating the establishment of several house churches in the Atlantic region and beyond. Between those that began and networking with others that we discovered, God created a linkage between approximately 50 groups and several ministries connected with these house churches. Bill was privileged, on a business trip to Holland to encourage the start-up of a church that meets in an Irish Pub on the outskirts of the red light district in Amsterdam.

Another of our ladies and her daughter started a church while on a missions trip to Cuba. From the community represented we have 4-5 couples who have paid their own way to minister on the mission field in places like Thailand, Ethiopia, and Rwanda. These folks are exceptional servants of Christ who have laid their lives at God's disposal without the financial support of any denominational entity. 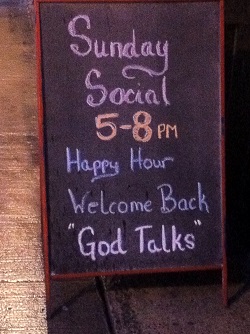 Locally in Fredericton, we have established a house church for same sex attracted people. From this came an invitation to do an Alpha Course in a local bar. Rather than jump into a programmatic response, we have a church that meets at this bar one Sunday evening a month for the time being.

I also have a picture of a signboard placed outside the bar where one of our churches meets. At his own initiative, the bar manager wrote: "Welcome back 'God Talks'". Another prior signboard said, "Join us for God Talks at the rear of the bar."

The 247 Network is registered with NOCN. My ministry partner and myself have the privilege of being involved with the Atlantic District of the Church of the Nazarene and also to have done work with the Atlantic Baptist Convention in terms of ministerial wellness.

Our heart is to serve without fanfare. None of us take any money from the ministry that we have been given. God has shown Himself absolutely faithful to me in terms of financial need. This should have come as no surprise but it did. That represents my own faithlessness never a question with God. He is Faithful and thus shows Himself to be so. He can be nothing else. I THANK Him for His Goodness!! 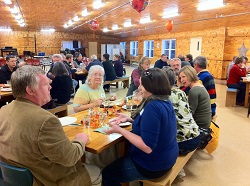 We believe that God is doing an unusual thing in this part of the country. We know this to be true globally. Actually, we probably have 25-30 active house churches across the Atlantic Region. They are different shapes and sizes. I am estimating a couple hundred people. We had a regional gathering for leaders last fall. It was held at Canoe Cove Christian Camp on PEI. There were about 50 people present. We commissioned 4 overseas missionary couples who are paying their own way in Thailand, Morocco, Africa and another place that escapes me just now.